Xylitol is a good-tasting bulk sweetener which is reduced in calories and dentally safe. Discovered in 1891, xylitol has been used as a sweetening agent in human food since the 1960s. It has gained widespread acceptance as an alternative sweetener due to its role in reducing the development of dental caries (cavities).

Xylitol occurs naturally in many fruits and vegetables and is even produced by the human body during normal metabolism. Produced commercially from plants such as birch and other hard wood trees and fibrous vegetation, xylitol has the same sweetness and bulk as sucrose with one-third fewer calories and no unpleasant aftertaste. It quickly dissolves and produces a cooling sensation in the mouth.

Xylitol is currently approved for use in foods, pharmaceuticals and oral health products around the world. Xylitol is used in foods such as chewing gum, gum drops and hard candy, and in pharmaceuticals and oral health products such as throat lozenges, cough syrups, children’s chewable multivitamins, toothpastes and mouthwashes. In the United States, xylitol is approved as a direct food additive for use in foods for special dietary uses.

In numerous clinical and field tests, the consumption of xylitol has consistently been associated with significantly reduced caries formation, even when participants were already practicing good oral hygiene. Results clearly establish that the use of xylitol sweetened foods provides additional help in the battle against tooth decay. Xylitol also inhibits the growth of Streptococcus mutans, the primary bacterium associated with dental caries. The usefulness of polyols, including xylitol, as alternatives to sugars and as part of a comprehensive program including proper dental hygiene, has been recognized by the American Dental Association. The US Food and Drug Administration (FDA) has also approved the use of a “does not promote tooth decay” health claim in labeling for sugar-free foods that contain xylitol or other polyols. In other countries, xylitol sweetened products may be labeled safe for teeth.

In a two-year Ylivieska study (1982 – 1984), children aged 11-12 who consumed 7 to 10 grams of xylitol daily in chewing gum were shown to exhibit a 30 to 60 percent reduction in new dental caries development compared to the control group not chewing gum.

Two studies that support earlier work which suggests that xylitol and fluoride act synergistically to increase the efficacy of oral hygiene products:

The long-term caries-preventing effects of xylitol have been studied as follow-up examinations to the Ylivieska and Belize study. Re-examination of the subjects 2 or 3 years after discontinuation of the use of xylitol revealed a continued reduction in caries increment in the post-use years of about 55%. In teeth erupting during the first year of the use of xylitol chewing gum, the long-term caries preventative effect was over 70%. Similarly, in a follow up to the Belize study, subjects were found to have a highly significant reduction in caries risk for five years after the discontinuation of xylitol consumption, with particular benefits observed in teeth erupting during and after the period of xylitol consumption. These results suggest that the value of xylitol may be highest during periods of high dental activity such as eruption of new teeth. 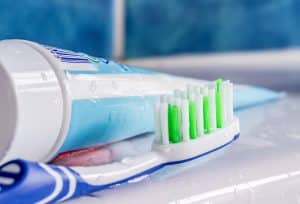 A relatively new benefit associated with the regular use of xylitol is that it can inhibit the transfer of the cariogenic Streptococcus mutans bacteria from mothers to their children. Several studies have demonstrated that mothers are the primary source of infection of Streptococcus mutans in the mouths of their children, and that preventing or delaying colonization by these bacteria in early childhood can lead to significant reductions in tooth decay later in life. In a recent study, children whose mothers regularly consumed xylitol chewing gum for the two-year period following the birth of the child, exhibited significantly reduced Streptococcus mutans colonization at the ages of two years, compared to children whose mothers had not consumed xylitol chewing gum, but who had been treated with fluoride or chlorhexidine varnish treatments. At the age of five years, the children whose mothers had consumed xylitol chewing gum in the original study had significantly less dental caries (71 – 74% fewer decayed, missing or filled teeth) than the children in the other two groups. Perhaps the most remarkable finding of this study is that this impressive reduction in caries was achieved solely through the treatment of the mothers, as the children received no treatment during this period.

The ability of xylitol sweetened chewing gums and tablets to reduce plaque accumulation and inhibit plaque re-growth, has been demonstrated in a number of studies (including studies at the Dental Schools of the Michigan and Indiana Universities.) Blends of xylitol and sorbitol in chewing gum have been shown to be more effective than sorbitol alone, but less effective than pure xylitol products.

The sweetness and pleasant cooling effect of xylitol-sweetened products (such as mints and chewing gum) create an increase in salivary flow. Saliva helps with cleaning and protecting teeth from decay, and has a role in repairing the damage caused by the early stages of the decay process.

Use In The Diets Of People With Diabetes

Control of blood glucose, lipids and weight are the three major goals of diabetes management today. Xylitol is slowly absorbed. Therefore, when xylitol is used, the rise in blood glucose and insulin response associated with the ingestion of glucose is significantly reduced (xylitol has a recognized glycemic index of 8.) The reduced caloric value (2.4 calories per gram versus 4.0 for sugar) of xylitol is consistent with the objective of weight control. Products sweetened with xylitol in place of sugar may be useful in providing a wider variety of reduced calorie and sugar free choices to people with diabetes.

The lower calorie value of xylitol and other polyols is recognized in other countries as well. For example, the European Union has provided a Nutritional Labeling Directive stating that polyols, including xylitol, have a caloric value of 2.4 calories per gram.

Absorption of xylitol by the human body is slow, allowing part of the ingested xylitol to reach the large intestine where metabolism yields fewer calories. Therefore, unlike sugar which contributes four calories per gram, the caloric contribution of xylitol is about 2.4 calories per gram. The U.S. Food and Drug Administration has stated it does not object to the use of this value. The lower caloric value of xylito land other polyols is recognized in other countries as well. For example, the European Union has provided a Nutritional Labeling Directive stating that polyols, including xylitol, have a caloric value of 2.4 calories per gram.

In 1986, the Federation of American Societies for Experimental Biology (FASEB) was commissioned by the U.S. Food and Drug Administration (FDA) to review all relevant data concerning xylitol and other polyols. The FASEB report’s scientific conclusions indicate that the use of xylitol in humans is safe. The report also affirms xylitol’s’ acceptability as an approved food additive for use in foods for special dietary uses.

In 1996, the Joint Expert Committee on Food Additives (JECFA), a prestigious scientific advisory body to the World Health Organization and the Food and Agricultural Organization of the United Nations, confirmed the safety of xylitol for human consumption and allocated xylitol an Acceptable Daily Intake (ADI) of “not specified” for xylitol. ADI, expressed in terms of body weight, is the amount of a food additive that can be taken daily in the diet over a lifetime without risk. An ADI of “not specified” is the safest category in which JECFA can place a food additive. The Scientific Committee for Food of the European Union (EU) also determined xylitol “acceptable” for dietary uses. Xylitol is approved in more than 35 countries.

Scientific and authoritative agencies around the world, including the U.S. Food and Drug Administration (FDA) and the World Health Organization (WHO), support the safety of polyols for use in foods.

Learning to live a healthier lifestyle is easy when you change one small thing at a time. Learn and find tips to start the change today!

We’ve got the answers to your frequently asked questions about polyols.

The Benefits of Polyols

These unique sweeteners taste like sugar but have special advantages.